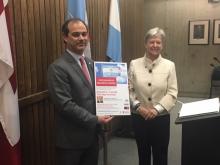 As part of the program of activities linked to the local academic field carried out by the Argentine Embassy, on March 28, Ambassador Marcelo Suárez Salvia gave a talk on the bilateral relationship between Argentina and Canada and the perspectives that it presents towards the future.

The meeting was held in the context of the so-called "Ambassadors Speakers Series" and was held in the Robertson Hall of Carlton University of Ottawa. It was co-hosted by the Norman Patterson School of International Affairs, the Ottawa Diplomatic Association and the Argentine Embassy in Canada.

The event was attended by a large number of attendees, including members of the Diplomatic Corps, local officials, teachers, students and the general public, who then had the opportunity to ask questions and comments to the speaker.