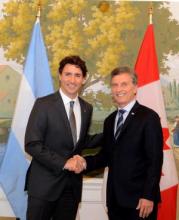 Washington, March 31, 2016 - President Mauricio Macri met today with Canada's Prime Minister Justin Trudeau with whom he agreed on the importance of enhancing the exploitation of renewable energies, mining, environmental care and security in The hemisphere, among other points in common.

Both heads of state stressed the need to relaunch the bilateral relationship, which has been drowsy in recent times and, in that sense, stressed that they have the possibility to work together in the next four years as their mandates start at the same time.

President Macri explained the changes in economic matters that the Argentine government is making in the country to regain confidence at the international level, to reinsert itself in the world and to recieve more investments and commercial exchange.

The meeting took place in the Concorde Hall of the Hotel Hay Adams, whHead of Statergentine Head of State is staying to participate in the Fourth World Summit of Nuclear Security organized by the United States in this capital.

The argentine government was represented by the Chancellor Susana Malcorra, US ambassador Martin Loustau, the ambassador to the UN Roberto García Moritán, el secretary of Strategic Affairs, Fulvio Pompeo, and the presidential spokesman, Ivan Pavlovsky.

Macri invited Trudeau to visit Argentina in the near future and the prime minister thanked him for the offer and told him that he had the opportunity to visit the country ten years ago and would like to return.

It reached the first magistrature of that country after the victory by absolute majority that obtained the Liberal Party in the elections 19 of October of 2015 and assumed the 4 of November of 2015.

Before engaging in politics, he was a teacher, a social activist, and a fruitful fundraiser for charitable causes.

He is the son of Pierre Trudeau, former prime minister of Canada between 1968 and 1979.
Since 2008 he has been a parliamentarian for the Papineau constituency and has led the Canadian Liberal Party since April 14, 2013.