Vice President Gabriela Michetti made a visit to Canada 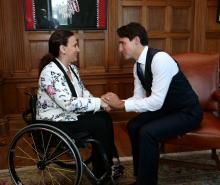 Between September 28 and October 4, Vice President Gabriela Michetti made a visit to Canada including the cities of Toronto and Ottawa.

The Vice President was accompanied by the Secretaries of State for Mining, Daniel Meilán, Commerce, Miguel Braun, Agriculture, Ricardo Negri, as well as officials of the Investment Promotion Agency and the Argentine Ministry of Foreign Affairs.

At the Toronto stage, she held meetings with representatives of the private sector and expressed the vocation of Argentina to receive investments in various fields of the economy, such as renewable energy, sustainable mining and agribusiness, among others, with the purpose of creating genuine and quality jobs in Argentina.

In addition to a meeting with Prime Minister Justin Trudeau, in Ottawa the Vice-President met with Senate Presidents George Furey and the House of Commons, Geoff Regan, as well as Ministers of Foreign Affairs, Stephane Dion, Women's Affairs, Patty Hadju and People with Disabilities, Carla Qualtrough.

In this regard, she said that in the meetings held she had the opportunity to report on the changes that have taken place in Argentina since last December, and the vocation of the current administration to establish stable and mature ties with the world.

She said that the visit was highly positive and the ties that were established with the private and public sector will bring concrete results in the near future due to the understanding and the interest shown by local entrepreneurs.

On the other hand, Argentine Ambassador Marcelo Suárez Salvia said that "Canadian officials and businessmen expressed their admiration for the changes in the country during this year and were optimistic about the future of our economy". He also considered in Canada, "they bet on Argentina as a reliable partner in the region."

Vice-President Michetti was extremely satisfied with the results of the visit and indicated that Canada is one of the countries that Argentina defines as priorities and strategic.