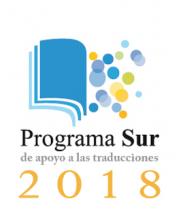 "PROGRAMA SUR" is a permanent policy of the Ministry of Foreign Affairs and Worship of Argentina. It was created in 2009 with the purpose of promoting the dissemination of Argentine thought and literature in the world by supporting the translation of literary works by Argentine authors published in Spanish into any other language.

From its creation to the present, it can be affirmed that the balance of this program is an unprecedented success for the policy of promotion of the Argentinean publishing sector abroad. In quantitative terms, the Program has become the largest translation subsidy program in the Americas with an average of 135 works per year.

The diversity of interested countries, languages ​​involved, ages, styles and origins of the authors and the genres of the translated works reaffirm the vast repercussion of this initiative.

LAUNCH OF THE 2ND TRANSLATION PERIOD  FOR 2018

The 2nd period for the year 2018 has been launched. The new applications will be received until September 30, 2018 and the approved works must be published before November 30, 2019. The interested publishers are informed that all the presentations must be made in accordance with the NEW REGULATIONS AND FORM, found at http://programa-sur.mrecic.gov.ar